VOLGA-DNEPR AIRLINES AND BOLLORE LOGISTICS NICE HELP TO DISCOVER ‘IS THERE LIFE ON MARS?’ 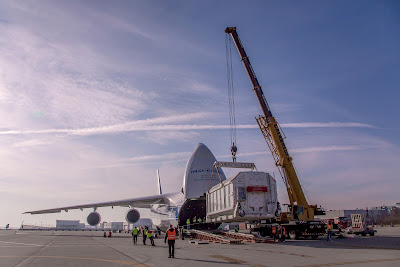 VOLGA-DNEPR AIRLINES AND BOLLORE LOGISTICS NICE HELP TO DISCOVER ‘IS THERE LIFE ON MARS?’


Volga-Dnepr Airlines has operated three An-124-100 cargo flights for global logistics company Bollore Logistics carrying equipment and materials for the ExoMars space exploration programme that aims to discover any traces of life on Mars.


The flights, which operated on December 18, 20 and 22 for consignor, Thales Alenia Space Italia, departed from Turin in Italy to Kazakhstan’s Baikonur Cosmodrome via Moscow’s Sheremetyevo Airport.


Volga-Dnepr’s cargo included the Entry, Descent and Landing Demonstration module (EDM) as well as the Trace Gas Orbiter (TGO) which will be launched into space in the first mission in March 2016. In total, Volga-Dnepr transported 20 x 20-foot containers, including two ‘hi-cube’ containers with materials for the ExoMars project launch campaign, loose cargo and a satellite container. Each of the flights commenced loading at 0900hrs and departed from Turin Airport at 1530hrs on their way to the Russian consignee, FGUP TsENKI, which provides launch services for the space industry.


ExoMars is a joint programme between the European Space Agency and the Russian space agency, Roscosmos. The 2016 mission will reach Mars in October and aims to demonstrate Europe’s ability to land a probe on the Red Planet. Meanwhile, the Orbiter will help to determine the landing site for the second mission in 2018 when the descent module will place a rover on Mars to drill down two metres into the Martian soil to take samples and perhaps discover any traces of life. The data captured by the probe is expected to feed the work of researchers for many years to come as they analyse the soil’s chemical, physical and biological properties.


This, however, is not Volga-Dnepr’s first ‘Mars mission’. In November 2011, the airline transported major parts of the launch vehicle for NASA’s most ambitious ‘Curiosity’ rover mission to Mars. In support of the mission, a Volga-Dnepr An-124-100 freighter delivered the Atlas V launch system, part of the Atlas rocket family operated by the Lockheed Martin-Boeing joint venture, United Launch Alliance, from Huntsville, Alabama, to Cape Canaveral in Florida.


Dennis Gliznoutsa, Vice President, Sales at Volga-Dnepr Airlines, said: “We are extremely proud to once again be the chosen air transportation partner for what could be a historic mission to Mars. We are excited to be part of the project and will be closely following the results of the first mission in 2016. We wish all of the partners in ExoMars great success in their endeavours.”


Volga-Dnepr Airlines is one of the world’s leading carriers of Aerospace cargoes, which account for some 30% of the Group’s business. To date, it has operated over 5,250 flights for customers in the industry, delivering more than 173,395 tonnes. The main cargoes carried by Volga-Dnepr are satellites, helicopters, aircraft and parts.